Ontario E-Bike Laws: Everything You Need to Know

Ontario E-Bike Laws: Everything You Need to Know

E-bikes, or electric bicycles, are the sort of transportation that falls directly into the grey area of traffic rules. There are several points of contention regarding e-bikes including (1) whether it is, in fact, a bike or a motorcycle and (2) whether motorists are allowed to drive e-bikes on the road or only on the bike lane.

This post aims to provide clarity regarding what you can do or cannot do when driving an e-bike in Ontario. Before we go any further, let us explore what qualifies an e-bike to set the record straight.

What Legally Counts as an E-Bike?

Legally, e-bikes should have the following features:

Additionally, e-bikes should have an efficient brake system that comes to a full stop within 9 metres from the point at which the brakes were applied. Police officers often ask e-bike riders to test the efficiency of the brakes. Failure to meet these standards or riding over the limit results in fines. Also, users are prohibited from modifying the vehicle to upgrade its speed and power.

Ontario is among the last provinces to legalize the use of electric bicycles on the road despite its federal regulation in Canada in 2001. E-bike users should follow and obey Ontario’s e-bike laws. To legally drive an e-bike, you must be at least 16 years old and wear a helmet.

The province of Ontario allows you to operate or own an e-bike without a license. Compared to motor vehicles, e-bikes are safer and easier to operate. Its power and speed limitations, as well as its safety built-in features and ease of use, make formal training and licensing unnecessary. Also, you do not need insurance to own an e-bike.

Like traditional bicycles, e-bikes are permitted on most residential roads and highways but only on designated bike lanes. However, municipalities have the right to restrict where e-bikes may be used and ban certain types, including:

Also, e-bikes are prohibited in recreational parks. If caught, you are subject to a fine.

E-bikes do not fall in the same category as bicycles, but you should follow the same set of road rules as a regular cyclist. This includes installing lights on your bike, signalling, and stopping at road stops.

In addition to e-bike legal requirements, you also need to perform maintenance tasks to prolong the life expectancy of your e-bike and ensure your safety.

E-Bikes Can Be a Risk to Pedestrian and Riders

E-bikes may be a cost-effective and environmentally-friendly mode of transportation, but they can pose a significant risk to both pedestrians and riders. Since operating an e-bike does not require a license nor any insurance or registration, you cannot claim accident benefits for your treatment and rehabilitation whether you are a pedestrian or a rider, unless your accident involves a motor vehicle.

When involved in an accident with a pedestrian or another rider, the e-biker and the injured party often end up in a difficult legal battle to establish a case for cost related to the injuries sustained. Whether you or the injured party is at fault, you will need the legal help of a highly experienced accident lawyer to represent you in court. Since summer is finally here and more e-bikers are out on the road, keep your eyes on the road and be aware of the potential risks associated with e-bikes, whether you are an e-biker or a pedestrian.

Michelle Linka Law is a trusted personal injury lawyer in Whitby who is committed to providing exceptional legal services that yield positive results. Let our professional team of personal injury lawyers be your partner in relieving your burdens by solving your legal problems. Give us a call today at (416) 477-7288 for a free consultation. Michelle attended the York University Fine Arts Music Program prior to obtaining her Bachelor of Laws (LL.B.) from Osgoode Hall Law School in 2008. Since then, Michelle has primarily practiced personal injury litigation, and is devoted to obtaining outstanding results for her clients. 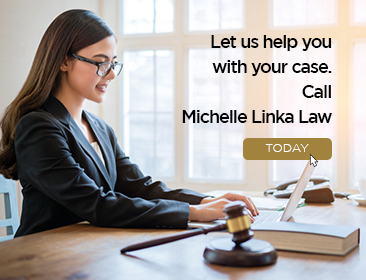